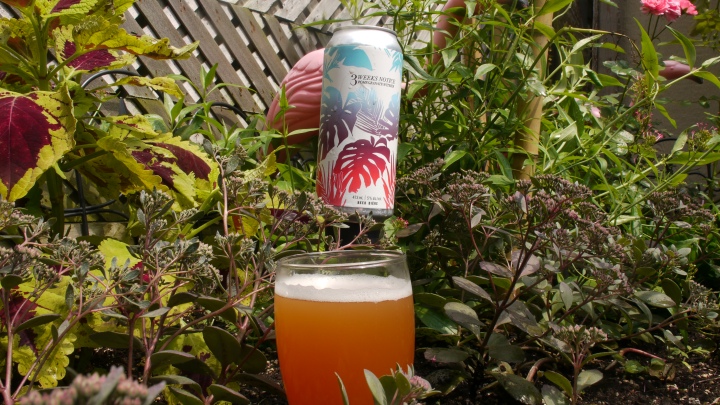 Are you looking for a great Summer beer?  Well, look no further as Wellington Brewery has released 3 Weeks Notice, a Pomegranate Witbier that clocks in at a easy-drinking 5% ABV.   Wellington Brewery has released this earlier this Summer but they found that it was over carbonated and recalled that batch.   Ironically, they said that the next batch would be 3 weeks later…

The design of the can is a very Summer-like, with leaves of blues, purples, pinks on a white background. 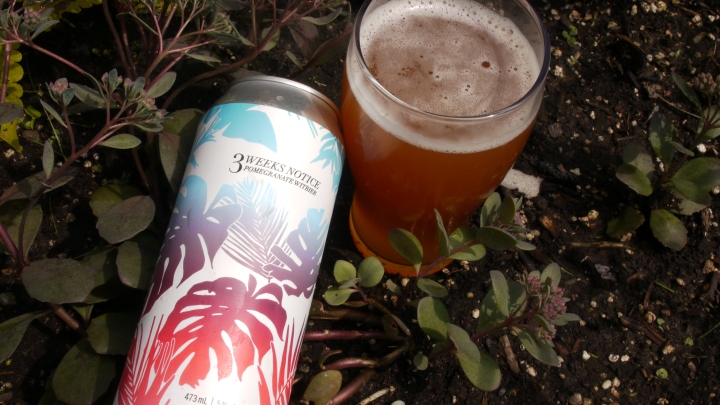 Out of the tallboy pours a unfiltered body of deep orange with a foamy white head that settled down to a thin layer.   The aroma is of cloves and grains with very faint notes of fruit.   With that first sip, you get notes of a simple Witbier, spices, cloves, that Belgian yeast.   It’s a smooth mouthfeel with a bit of a dry finish.  There’s notes of fruits, not really picking up the Pomegranate though (Which may be a good thing because, well not everybody wants an overwhelming fruit beer.)

3 Weeks Notice screams “Summer” to me, it’s smooth, it’s refreshing, and enjoyable.  If you’re a fan of Wheat beers in general, well, this one will be right up your alley.

Speaking of Wellington Brewery, they’re hosting their 3rd Annual Cask Fest, which it’s a lot of fun.  I attended the first one and made plans to attend the the second event (which I couldn’t because of the Cochlear Implant surgery.)

However, you will find me at the Welly Cask Fest that’s happening on September 7th and 8th.  There will be 3 sessions to attend, one on Friday (6-11pm) and two on Saturday (12-5pm and 6-11pm).  Tickets are only $25 (plus HST and Service Charge) – there are also shuttle buses happening as well for Guelph, Kitchener-Waterloo (Only Session 3) and Toronto (Again, only for Session 3).

For more information on this awesome event, check out www.wellycaskfest.com.